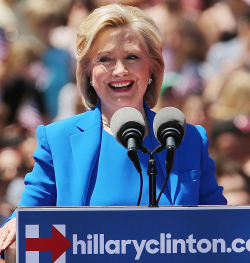 Hillary Clinton on the campaign trail

I hate watching election news on TV or reading it in certain publications. It makes me angry. In a futile quest to make elections interesting, the drummed up fake balance reporting is in fact hurting our democracy.

Joining a long list of concerned media voices, The New York Times’ editorial page this week linked up with the Beltway chorus to express alarm over the Clinton Foundation and the “question” it presents for Democratic presidential nominee Hillary Clinton’s campaign.

Surveying the well-trampled ground of supposed conflicts of interest and insinuations that Clinton sold State Department access to donors, the Times announced a pressing “need for major changes at the foundation now, before the November election.”

As part of its declaration, the newspaper dutifully noted, “‘Pay-to-play’ charges by Donald Trump have not been proved.” But the Times, like so many other lecturing voices, was quite clear in claiming that the Clintons have to address concerns about optics even if that means shutting down their landmark global charity. That’s how important it now is for the do-good foundation to be spotless and pure: Optics trump humanitarianism.

Or, there’s no proof anybody did anything wrong, therefore drastic actions must be taken to fix the problem.

The meandering foundation story has become a case study for the Beltway media’s double standard: holding Clinton to a higher mark that’s based on optics, not on facts. Unable to prove misconduct or anything close to it (just ask the AP), the press relies on the comfy confines of “optics” and the “appearance” of conflict to allow them to attack Clinton and the foundation.

How The Media’s Obsession With “Optics” Is Ruining Campaign Journalism

So while giving little to no time to Trump’s vast connection conflicts and until this past weekend none of the press was reporting on a real pay-to-play scandal between Trump and Florida’s Attorney General, Hillary Clinton and the Clinton Foundation have been getting extra coverage even when there is nothing wrong going on.

But it isn’t just the “optics of a thing” hurting democracy, it is also the false balance the media thinks it needs to provide no matter what the facts are.

“Americans’ distaste for both Trump and Clinton is record-breaking,” read FiveThirtyEight. “Trump vs. Clinton poised to be battle of most disliked nominees in decades” decreed ABC news. The New York Post upped the emotion factor, declaring Trump and Clinton the most “despised candidates in history.” The Washington Post dubbed the election “The year of the hated.”

Now, a new poll from ABC News and the Washington Post seemingly illustrates the sense of resignation voters feel toward these candidates as Election Day approaches. Among registered voters who participated in the poll, 59 percent said they view Clinton unfavorably, putting her on nearly equal level with Trump’s 60 percent unfavorables.

But when it comes to these two particular candidates?—?and when you step back to consider the context, the history, and some science?—?the narrative that both candidates are uniquely hated and distrusted is actually misleading.

In 2012, Nate Silver crunched the numbers for the New York Times. The pattern is clear: When Hillary Clinton announces that she’s seeking a new position?—?such as when she declared she would seek the open New York Senate seat, and when she announced her candidacy for presidency in 2008?—?her favorable numbers immediately start plummeting, and her unfavorable numbers begin to climb. But once she’s in those positions and is actually working, such as over the course of her Senate career, Americans consistently rate her as more favorable than unfavorable.

Part of the reason, raised in the article above, the media is so negative about Hillary is sexism. People don’t like women who ask for promotions.

Another reason is the media’s incessant need to make the election interesting by creating fake drama and distilling political journalism down to a base “he said/she said” middle school playground situation.

One candidate is so far off the scale unqualified for office and trying to tell stories about the other candidate to make it seem balanced just makes a mockery of democracy. I know politicians can “lie” during a campaign but the journalists covering the race need to start pointing out these “lies” with the actual facts.

True, there aren’t many efforts to pretend that Donald Trump is a paragon of honesty. But it’s hard to escape the impression that he’s being graded on a curve. If he manages to read from a TelePrompter without going off script, he’s being presidential. If he seems to suggest that he wouldn’t round up all 11 million undocumented immigrants right away, he’s moving into the mainstream. And many of his multiple scandals, like what appear to be clear payoffs to state attorneys general to back off investigating Trump University, get remarkably little attention.

Meanwhile, we have the presumption that anything Hillary Clinton does must be corrupt, most spectacularly illustrated by the increasingly bizarre coverage of the Clinton Foundation.

Step back for a moment, and think about what that foundation is about. When Bill Clinton left office, he was a popular, globally respected figure. What should he have done with that reputation? Raising large sums for a charity that saves the lives of poor children sounds like a pretty reasonable, virtuous course of action. And the Clinton Foundation is, by all accounts, a big force for good in the world. For example, Charity Watch, an independent watchdog, gives it an “A” rating — better than the American Red Cross.

Hillary is being punished because she plays the political game just like the men do. Most women in politics get punished like that and it is wrong.

The negative view of her even can be found in friends of mine who claim to be progressive (pro choice, support of LGBT, and other liberal views) but who also look the other way when a friend of theirs calls Clinton some form of ‘a fucking lying bitch’ or worse, the C-word.

Why do they have that negative view of Clinton? I think because they’ve been groomed by the constant negative media stories about her. If you actually look at the information you would see there is nothing there. It is almost as bad as the people who won’t let go of long refuted questions about President Obama’s religion or birth place.

That’s why it matters how the national media covers politics because it does influence how people think. If it can cause normally rational progressive people to hold false views of Hillary then what is it doing to the low information voter?

I now only read or listen to stories about a candidate’s policies or plans for office and not the “he said/she said” bullshit passing for political journalism.

I end up with a LOT of free time.