On Monday night, Kansas City Chiefs safety Husain Abdullah intercepted a Tom Brady pass and returned it for a touchdown. He decided to celebrate the big play and knelt to the ground in the endzone to pray. He was penalized according to the rulebook but the next day the NFL said it goofed. Now there is one set of rules for religious players and another set for those who don’t wear their religion on their sleeves. Religious privilege has arrived in the NFL.

Ohio State and the team north of them play this Saturday (11/24) in their annual rivalry game. The difference is that Ohio State is 11-0 but is banned from post season play so ‘The Game’ is our Bowl game and championship all rolled into one. The Ohio State biased newspaper The Columbus Dispatch thinks having a bowl ban this season was a wrong result of the NCAA punishment the school got for Tattoogate. If only hindsight was a real thing to use in making decisions.

Ohio State got a bowl ban and other NCAA punishment after Ohio State quarterback Terrelle Pryor, as well as several other teammates, had been involved with selling memorabilia for tattoos and money. Urban Meyer became coach in 2011 and in his first season has the Buckeyes undefeated at 11-0 with nothing else to play for except to beat their rivals from the state north of Ohio.

END_OF_DOCUMENT_TOKEN_TO_BE_REPLACED

Herman Cain made a campaign stop at The Ohio State University in Columbus on Wednesday 11/30/11 and a Coach Woody Hayes impersonator introduced him. Woody Hayes endorsing Herman Cain? Is that really appropriate for a public college icon? Does this mean that Brutus Buckeye will be endorsing Romney or Newt next? I hope not. The introduction, which was pretty political, seemed to be an inappropriate use of a symbol of a publicly funded University.

Woody, who has been dead since 1987, was a staunch Republican. He was a personal friend of President Richard Nixon. Nixon even gave the eulogy at Woody’s funeral. Woody Hayes also was someone who valued character and integrity above all else. He also knew a lot about US foreign policy and endowed the National Security Studies chair at Ohio State’s Mershon Center for International Security Studies. I strongly doubt Woody would support someone like Herman Cain, who lacks those things.

END_OF_DOCUMENT_TOKEN_TO_BE_REPLACED

Finally the college football season is here. As a treat I present a video clip of the best tradition of them all – the ramp entrance by the Ohio State University Marching Band in Ohio Stadium in Columbus.

END_OF_DOCUMENT_TOKEN_TO_BE_REPLACED 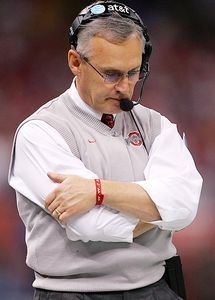 Ohio State football coach Jim Tressel, held out as the model of integrity, resigned Monday as the pressure mounted due to a memorabilia-for-tattoo scandal that showed no sign of simmering down. Like all media created heroes, the backlash and piling on has been merciless. Besides the obvious questions about what is true or not, where was the Columbus media when all this was going on?

The start was in December when we all found out that 5 players had traded memorabilia (rings, jerseys, autographs, etc…) for tattoos at a Columbus tattoo parlor. At the time Coach Tressel and Ohio State officials claimed they found out about it in December. The five players were allowed to play in the season ending Sugar Bowl but were suspended for five games to start the 2011 season.