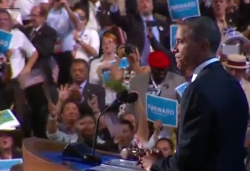 One glaring omission from the Republican National Convention was that President George W. Bush and most of his cabinet were missing in action. The Democrats had no such issue with their past office holder. On Wednesday President Clinton blasted the GOP in a tour de force speech that like the Clinton of old lasted way past the allotted time but he said so much. Elizabeth Warren also had a kick ass speech and then on Thursday night President Obama sealed the deal for his reelection with a great speech of his own.