I fully expected Hillary Clinton to eek out a slim victory in the election and I would spend this time talking about reforming the system so we can expect better candidates in the future. Donald Trump blew that out of the water by winning in an upset. I’ve decided to continue to call for reform but this will be my last political blog post for awhile. I need a break.

I plan to stick with church and state issues for now but I won’t be posting about anything concerning national politics after today. My head hurts.

END_OF_DOCUMENT_TOKEN_TO_BE_REPLACED

This election is unlike ones I’ve experienced in my lifetime and some pundits claim it is the most off-the-wall campaign they’ve seen. All I know is that each election helps show how terrible conservatives are at politics.

END_OF_DOCUMENT_TOKEN_TO_BE_REPLACED

Hillary Clinton on the campaign trail

I hate watching election news on TV or reading it in certain publications. It makes me angry. In a futile quest to make elections interesting, the drummed up fake balance reporting is in fact hurting our democracy.

END_OF_DOCUMENT_TOKEN_TO_BE_REPLACED 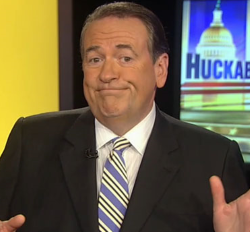 I read, with amusement, Mike Huckabee telling reporters in New Hampshire, that he survived the Clinton political machine before and he hoped to do it again in his run for President in 2016. History shows that Huchabee owes his entire political career to President and Hillary Clinton. If not for them, Huckabee might be a preacher in some backwater small town now. His comments about the Clintons are disingenuous at best.

The Republicans have been running with the idea that the attack on the Benghazi consulate, in 2012 which led to four deaths including the U.S. Ambassador J. Christopher Stevens, is somehow as bad as Watergate, the Holocaust, and the burning of the Reichstag. The fact is that the Republicans are harping on Benghazi because they want to smear President Obama once again and to try and undercut the potential 2016 Democratic presidential candidate Hillary Clinton while trying to distract from their do-nothing Congressional leadership that refuses to do anything to help the actual people in this country.