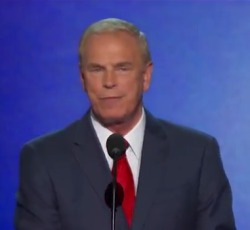 Although I am not watching the Democratic National Convention live this week I did check out the Tuesday night speech by former Ohio Governor Ted Strickland. I was impressed. Early speculation was he would attack current Ohio Governor John Kasich since he had spoken the first night of the Republican convention. Instead Strickland brought up one line of attack on Romney that I would like to see more of – attacking Romney’s patriotism because he has his money outside of the country.

No joke that elected Republicans in Congress hate the unemployed. Latest proof is this week’s douche Senate Minority Whip Jon Kyl who claimed that tax cuts for the rich are needed more than unemployment benefits. Also it seems that Saint Ronald Reagan was more into wealth redistribution and it wasn’t to regular Americans.

The second highest ranking Republican in the Senate doubled down on a controversial statement he made this weekend, arguing in greater detail that tax cuts for wealthy people should never be offset by tax increases in other areas — but that unemployment benefits need to be fully paid for by either spending cuts or tax increases. In so doing, he claimed candidly that the very existence of unemployment insurance is a “necessary evil,” while tax cuts ought not be paid for by increases in order to make it easier to shrink the size of government.

And the truth about President Ronald Reagan and his economic policy when he took office in 1981:

“Conservative policies transformed the United States from the largest creditor nation to the largest debtor nation in just a few years, and it has only gotten worse since then. Working people’s share of the benefits from increased productivity took a sudden turn down. This resulted in intense concentration of wealth at the top.”

6 Shocking Ways Conservatives Helped Cause the Economic Destruction of America

So the long and short is the Reagan Era brought out a redistribution of wealth from regular people to the very rich that we see today.