Reza Aslan, writer and scholar of religious studies, was on the Daily Show for an interview on May 13th

Being a Humanist and an atheist, I get exposed to a range of views on religion. On the strict atheist side I hear about how religion should be left in the dustbin of history while on the Humanist side I tend to hear that religion is just pretty words that make people feel good. I’ve always found the idea that religion is just pretty words to be at best naive and ignores the reality in the world.

Last Wednesday, Reza Aslan, writer and scholar of religious studies, was on the Daily Show for an interview.

END_OF_DOCUMENT_TOKEN_TO_BE_REPLACED

One part of political debate I like is using images to make a point. Whether it is a chart or a quote image, these graphics hold on to the adage that a picture is worth a thousand words. They are also easy to share in social media. However one still needs to be careful one isn’t sharing inaccurate information. Don’t post or share any graphic unless you can confirm the accuracy of the information.

Earlier this year this chart was making the rounds of the blogs I read:

END_OF_DOCUMENT_TOKEN_TO_BE_REPLACED

Today in my twitter stream was someone ranting about Glenn Greenwald and Katrina vanden Heuvel writing nice things about Ron Paul. In fact the person said both were RWNJs for supporting Paul. Of course the tweeter was wrong. Neither was supporting Paul only pointing out the ideas that Paul has that liberals usually support. I agree with most of what Greenwald writes but when talking about Ron Paul I disagree with his unstated conclusion. 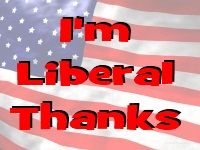 I admit I’m a liberal and have been for most of my life. David Mamet is a well known and loved screen and play writer who I have admired for his creative work. In 2008 he wrote an essay in the Village Voice that gave the big kiss off to being a liberal. His essay was titled “Why I Am No Longer a ‘Brain-Dead Liberal'” where he explains how he changed from a liberal to libertarian. I feel sad that a smart and well-respected person can come to a conclusion based on wrong information. I want to explain how one can be a liberal and not be “brain-dead”.

I spent Saturday afternoon watching the “Rally to Restore Sanity and/or Fear” and enjoyed it for the most part. But reading some of the tweets from the pundit class showed some of them missed the point. The only problem I had with it, is the idea that the political insanity comes from both sides equally. That’s a false equivalency.

People like David Corn and Talking Point Memo’s Brian Beutler seemed under the wrong impression that the rally was a GOTV rally and complained throughout that no one on stage mentioned voting. Mainstream media outlets also assumed it was a partisan political rally because they tripped over themselves to ban their employees from attending or participating in it.

Jon Stewart made clear that it was a comedy show to point out the problem of our current rancid political debate in the country not a GOTV show. It was definitely not partisan.

While I do agree that we need more civility, the rancid aggressiveness is one sided and the side that is most aggressive is the Tea Party/GOP side. They need to tone down thousands of percent more than those on the left side.

That is where Stewart is naive. There are two (or more) points of view but NOT all are equally valid. Most from the right are based on complete lies.

I agree we should work on toning down the rhetoric but progressives and others on the left side should NEVER drop our guard and hope and pray the right joins us in working together. That’s why the President and the Democrats are going to take a hit on election day.

How many times do we need to be beat up before people like Stewart get it?