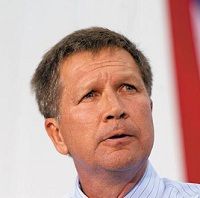 After finishing a long distant second in the New Hampshire primary, Ohio Governor John Kasich’s plan to be the GOP’s ‘Great White Hope’ seems to be moving along. Now it seems the media is finally looking more closely at Kasich’s record in Ohio. We’ve been screaming about his lies ever since he joined the race for President.

It’s common knowledge that Mitt Romney massively lied during the first Presidential debate on October 3rd. Now it seems he’s blatantly lying in his campaign advertisements. One in particular, running in my neck of the woods, claims a source for some tax data is non-partisan when in reality the American Enterprise Institute is far from non-partisan.

Here is the ad:

END_OF_DOCUMENT_TOKEN_TO_BE_REPLACED

I’m sure everyone has seen the video of Mitt Romney talking about never getting the vote of the so-called 47% of Americans who pay no income taxes and who will vote for the President to keep the checks coming. My amusement came from the fact that what he said is how people like Romney actually feel about the rest of us regular people. Some have called it a gaffe and then Republicans trot out gaffes said by President Obama at different times as if it’s the same thing as what Romney did. It’s a false equivalency, the Republican whine shows they are missing the forest for the trees.

Now that the party conventions are over, the meat of the 2012 US Presidential campaign gets underway. Non-stop campaign stops in battle ground states and wall-to-wall advertisements on TV and radio. Except this week here in Ohio. Ads from the Romney campaign have been few and far between. Since the Democratic Convention ended I’ve seen one ad from a pro-Romney super pac and one Romney ad. Picking up where the GOP left off during their convention, the new Romney ad is less than truthful and contradicts Ohio’s Republican Governor John Kasich.

END_OF_DOCUMENT_TOKEN_TO_BE_REPLACED

Monday August 27th starts the US Political silly season with the Republican National Convention in Tampa, FL followed on September 3rd with the Democratic National Convention in Charlotte, NC. I will be barely paying attention to them as to me they are nothing but an expensive pep rally before the final three months of the campaign. Conventions lost their usefulness years ago and the only solace I have is the broadcast networks won’t be having gavel-to-gavel coverage. I’ve got better things to do.

I rarely agree with David Frum but on this issue I do: